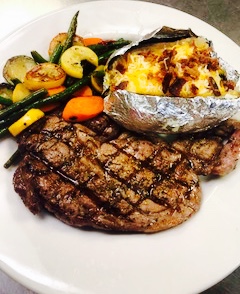 Our family was born and raised in the Texas Panhandle. Between starting a family and being young entrepreneurs, Darren and Kamala have always had a presence in Dumas and the surrounding panhandle communities. Upon leaving the cattle business in 2007 Darren and Kamala began thinking about their next business. After lengthy conversations a vision of opening our own restaurant began to take form. In 2009, 287 Roadhouse opened in Dumas, Tx and ten years later we are still here and thriving, family owned and operated. Now with three generations in the operation and a second location in Amarillo called House Divided we would like to welcome you to The Roadhouse, 287 Roadhouse.